archives for the archives.. 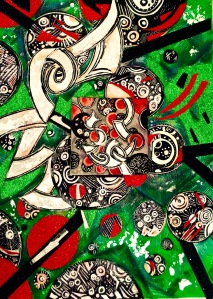 Boo-Hooray and Gavin Brown’s enterprise are STOKED to present a four-day exhibition of recent paintings by Little Annie aka Annie Anxiety, celebrating her recent book for Exitstencil Press. As an iconic presence in New York City punk rock, post-punk, disco and hip hop life for over four decades, Little Annie first stepped on stage as a teenager at Max’s Kansas City, singing with her band “Annie and the Asexuals”. Upon moving to the UK she began working with Penny Rimbaud and Crass, and continued her life of extensive touring as a solo artist and in collaboration, which she does till the present day. Little Annie has performed and recorded with acts including Current 93, Coil, Nurse With Wound, Marc Almond, Antony Hegarty, Baby Dee, the Swans and Crass among others. In the late 1990s Annie took a hiatus from music. Being in her words ‘driven insane by the hues’ during a period of living in Mexico, the New Yorker returned home determined to teach herself painting – something which she had dabbled in previously – by devoting a full year of average 16 hour days. Employing every medium with the exception of oils, she first exhibited as part of a group show curated by Louis Laurita, whom she gained much encouragement and guidance from, and had her first solo gallery show 4 years later in 2002.

In 2013 – Little Annie and Baby Dee released State of Grace on Tin Angel Records and toured extensively in North America and Europe. She has teamed back up again with her friends Gee Vaucher & Penny Rimbaud of Crass, whom have released her book of prose, I REMEMBER MEXICO and most recently JUST LIKE I PICTURED IT, a book of her recent series of monochromatic cityscapes, the result of a fortuitous bout of illness where she unable to get to her studio to paint, she discovered a love of pencil and inks. These stark chiaroscuro drawings of stylized New York citiscapes sit in awesome contrast to her recent Miami paintings; explosions of layered collage and paint reflecting her new hometown.

Little Annie’s Miami paintings evoke a balance between chaos and focus, blending flora into architecture creating mandalas of striking colors and patterns. These recent works are a response to the natural and artificial light and ever-present urban jungle of her newly adopted home of Miami. Annie is presently finishing off her 8th solo album due for release in winter 2016, and on another paining marathon inspired by the kinetic vortex of her new home in the city of Miami, seven miles north west of the Bermuda Triangle. 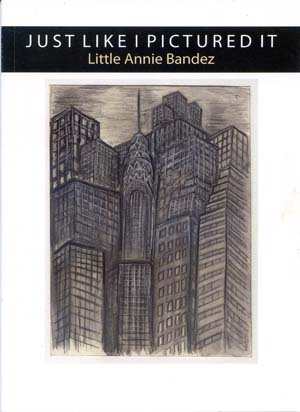 Will be showing my series of recent works in NYC at Gavin Brown’s space on Grand Street on Wednesday, Sept 2nd through Sunday, Sept 6th. – more details to follow sooner the time but can tell ya im pleased as proverbial punch -One below i from recent book of prints and prose title “Just Like I Pictured It’, available via exitstencilpress.com.